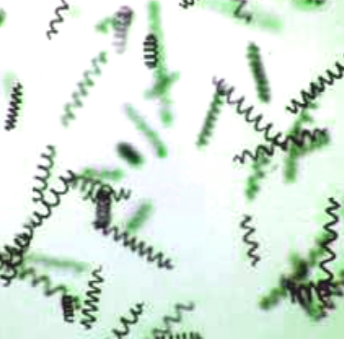 Spirulina is a microalgae, or cyanobacteria (cyano = blue), with the scientific name Arthrospira platensis that appeared on Earth more than three billion years ago. It is commonly called micro-algae or blue-green algae, as it is an aquatic micro-organism capable of photosynthesis, and characterized by its content of a natural blue pigment unique in nature: phycocyanin. This phytopigment acts as a powerful antioxidant in the human body. Its green color comes from chlorophyll, which it contains in a large proportion.

It is a prokaryotic micro-organism: it has no nucleus. DNA and RNA (located in the nucleus in eukaryotic cells) are distributed throughout the spirulina filament. Spirulina filaments (called trichomes) are multicellular (that is, made up of several cells). They measure 0.3mm on average, so it is necessary to use a microscope to see them. It is the spiral shape that characterizes its various species that has given spirulina its name.

Cyanobacteria have been the first living beings in history capable of carrying out photosynthesis to produce polysaccharides and proteins thanks to water and sunlight, not forgetting the production of oxygen that we breathe today. The appearance of spirulina is estimated to be more than 3,000 million years old… Currently, it continues to grow naturally in lakes with a high mineral concentration (Lake Tchad-Africa, Lake Lonar-India, Lake Texcoco-Mexico, lagoons of the Doñana Natural Park-Spain ). And if it has resisted so long, it is thanks to its extraordinary composition: mineral salts, vitamins, amino acids, enzymes and antioxidant pigments such as Beta-carotene, chlorophyll or phycocyanin, which are used to carry out photosynthesis at various wavelengths.

According to López de Gomara, chaplain of Hernán Cortés, in the book "The Conquest of Mexico", the Aztecs already consumed spirulina cookies for their healthy properties, known as tecuitlatl.

Today, it knows an important development for its applications in dietetics, cosmetics and nutrition. It is part of the foods with a formidable potential for the food challenges of the future, to such an extent that the ESA (European Space Agency) raises its cultivation in space for astronauts! The FAO has declared it the food of the millennium.

The main species of spirulina cultivated for use as food are A. platensis and A. maxima. Important: the cell walls of spirulina are not made of cellulose like those of most vegetables, but of murein (a mucopolymer) and polysaccharides (complex sugars), compounds that are more fragile than cellulose and easily digestible by the body.< /p>

Spirulina is capable of photosynthesis and we owe it the oxygen we breathe today. The Aztecs and the Mayans already consumed it as an energy food. The development of aquaculture has favored its cultivation and the approach of this seaweed that is so beneficial for people.

To learn more: Algae Industry Magazine and the French Federation of Spirulina Producers .

Until 2004, spirulina was almost non-existent in Spain. Despite the fact that its presence has increased over the years, currently most of what is marketed comes from industrial crops installed in China, the United States, etc.

The production of artisanal spirulina is beginning in Spain. It is a product with a quality guarantee, which is produced by drying processes at low temperatures, which allows it to keep its nutritional properties intact.

Download here the Manual for growing spirulina for self-consumption, prepared by the International Network of Spirulina Growers for Food Sovereignty.

For courses and workshops on the professional cultivation of spirulina, contact us here.

Spirulina is a source of vitality and energy thanks to its extraordinary composition:

To see the complete composition of spirulina, click here.

Important: the cell walls of spirulina are not made of cellulose like most vegetables, but murein, a more fragile compound than cellulose which allows the body to more easily assimilate nutrients (between 80 and 100). 85% protein digestibility!).

4. WHAT IS SPIRULINA USED FOR?

6. HOW IS SPIRULINA TAKEN?

About 3-5g is recommended. per day in periods of 6-8 weeks in a row (2 to 3 times a year for example during season changes) or throughout the year according to the needs of each person. Start with a minimum quantity increasing daily until the desired consumption.
In tablets, (see characteristics in the store) it is recommended to take fasting spirulina together with a source of vitamin C (to improve the assimilation of iron), such as orange juice, lemon juice, etc. (Athletes are recommended to take spirulina before and after physical exertion as well, to improve their recovery).

In granules or Noodles, (see features in the store), 1 to 2 tablespoons/day is the recommended amount; very convenient to add it to your favorite dishes such as salads, pasta, smoothies, etc. (always after cooking to preserve its nutritional composition).